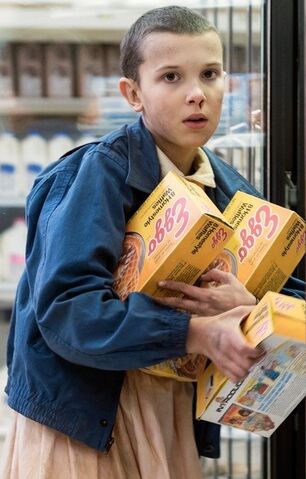 Death and taxes – nothing in this world is as certain, said Benjamin Franklin. Alternatively, could we say that nothing is as certain as death and daily food?

After all, the primal need for daily sustenance is what makes all living and breathing things the same.

(Spoiler alert) Hence, when Chief Hopper in Stranger Things is seen placing some Eggo waffles and Christmas cookies in the forest box, we immediately recognise the hint – El (aka Eleven or Jane) is still somewhere out there alive.

How the protagonist is so connected with Eggos begins when she first escapes from Hawkins Lab. While hiding in the basement in Mike’s house, a meal of Eggos is the first she is given. She soon grows very fond of not only Eggos but also of her benefactor, Mike.

Mike’s Eggos mean more than just an act of hospitality or kindness to El. Besides tending to El’s biological need for food, Mike has, in consequence, also filled her emotional needs. Hunger reveals the most vulnerable part of us. When denied food, a gift of this daily fuel, however minuscule, appeals to the humility of the receiver, and accentuates the humanity of the giver.

Cicero said that gratitude is the greatest of virtues. When El is capable of reciprocating Mike’s Eggos with gratitude, we know that humanity lives within this strange and unknown girl. It tones down her peculiar, possibly even sinister image, especially when she hurls Mike’s bully off the cliff, or when she breaks the necks of Hawkins Lab’s guards without lifting a finger.

Mike’s gift of Eggos, therefore, grants El the need to belong. Comfort food provides us such solace just by reminiscing over it, and this is precisely what Eggos give El. They fill the gap of wanting to belong and provide a place to anchor and a source of security.

The same effect of food is seen in Dickens’s Great Expectations. The first meal of the novel takes place in the wilderness where Magwitch meets Pip for the first time. In his desperation for food, Magwitch threatens Pip and demands he brings him some “wittles” – referring to food. Magwitch then wolfs down his meal like a dog, with “strong, sharp sudden bites”. His wild manner of gobbling and snapping up food brings out a beastly view of Magwitch. It augments the dubious image already created by his threatening of Pip into stealing food for him.

We begin to grow sceptical of this unknown character until Magwitch reveals that, underneath this grotesque hunger of his, is a man capable of gratitude and generosity.

First, in an attempt to protect Pip, he lies, saying he and not Pip had stolen the food, Many years on, he bequeaths Pip a large sum of money in order for Pip to advance in life as a “gentleman”.

The mere provision of food becomes instrumental in the fate of Pip. By satisfying Magwitch’s hunger for food, Pip has also warmed the humanity in Magwitch.

Magwitch’s repayment of Pip’s act of kindness and hospitality, like El’s repayment of Mike’s, highlights an understanding of the saying: do unto others as you would have them do unto you. In both instances, this is prompted by one significant meal – a meal given in a time of dire helplessness.

By revealing the humane quality in both the unknowns – El and Magwitch – food diminishes their inimicality and unveils a certain accessibility. What food has done for both El and Magwitch testifies to a common basic need in all of us; to be sustained not only physically but also emotionally.

What do you want on your Fried Rice? Or do you pre

How do you like your fried chicken? #sgfood #food

Load More...
This error message is only visible to WordPress admins


Error: API requests are being delayed for this account. New posts will not be retrieved.